Wow. So many constraints. Definitely click this one to see it in its full glory.

Gaming has changed. It’s no longer about fun gameplay, pretty graphics, or cool characters. It’s an endless series of gender battles, fought by misogynists and feminists. Gaming, and its consumption of life, has become a well-oiled machine.

There’s no need to continue on. You get the point. If you’ve ever played Metal Gear Solid 4, you may recognize that quote. Well, not that exact quote, but something like it. And it fits. An industry built on delivering fun experiences other media couldn’t deliver is now under attack. At least that’s how I feel.

I feel it’s under attack not because a lot of games feel the same or because they cost too much or anything like that. It’s under attack because of things that don’t really relate all that much to gaming in the first place: accurate gender, race, and sexual representation.

It isn’t right when politics and ideologies take precedence over fun.

Back in my day, it was “Thanks game developers for revealing to us exactly zero games featuring non-scripted physics.” And we didn’t whine on Twitter since there was no Twitter.

For the longest time, the battle between game developers revolved around being the first to come up with a really cool new concept. Nintendo defined the 3D platforming game with Super Mario 64, Bungie redefined the first-person shooter genre with the original Halo, and Rockstar has always been great at cramming in as many activities and gameplay features in each and every game, from Grand Theft Auto to Bully to Red Dead Redemption. But not Rockstar Games presents Table Tennis. We won’t speak of that ever again.

There are plenty of more example of companies who try to bring something new to the video game industry in terms of gameplay. For years during the early to mid 2000s, every FPS game was touted as a “Halo killer,” something that was made specifically to knock the FPS king off its throne. The late 90s had seen something similar, with every 3D platforming game trying to beat Mario at his own game. We saw the likes of Banjo-Kazooie, Crash Bandicoot, Spyro the Dragon, and much more.

Back then, games revolved around gameplay. They revolved around having fun, either by yourself or with friends. Things changed, and games became less about a combination of fun mechanics and more about telling a great story. They became experiences, interactive stories that could sometimes make you think while controlling a character.

That’s cool too. At the end of the day, most games were still all about the gameplay, about providing an experience to people they couldn’t get anywhere else. Do you want to live an action movie? Then you have to buy this shooting game. It has characters, it has stories, but most importantly, it has explosions. But not just any kind of explosions. It has explosions made by you, the player. You get to blow things up. You get to rescue the hostages. You get to defeat the bad guy and save the world from the apocalypse or the military strike or the aliens or whatever.

But in the past year or two, something changed. And I mean really changed.

This has NOTHING to do with the fact the majority of gamers are still male. It’s all about the evil patriarchy.

Almost suddenly, it felt like the focus changed. It wasn’t about how fun a game was, how awesome the graphics were, how cool the soundtrack was, or how well-written the story was. All that went down the drain. Those things, the very foundations of video games, are now increasingly being ignored in favour of topics I never though would enter the discussion of video games: gender representation, sexism, feminism, and all that jazz.

Years ago, the largest social concern surrounding video games was violence. Lobbyists tried to find a connection between playing video games and real world violence, but to this day nothing is concrete. Violence caused by video games is still a topic from time to time, but the latest concern isn’t games turning us into killers, it’s whether or not games realistically depicts characters.

That’s a bit of a leap, isn’t it? My parents were worried I was going to shoot people because I played video games. Now future me will apparently be worried his future kids aren’t going to be exposed to realistic depictions of females because they play video games. Glad to see where our priorities lie.

I completely agree that most female game characters are embarrassing to look at. There’s rarely a reason they need to be dressed (or undressed, I suppose) in such a way. I suppose it’s easier for me to simply accept it because I’m a cis straight privileged white male or whatever term people are throwing around these days. I don’t follow all that stuff, so forgive me if that term is still early-2013 and I’m not up to date.

So it’s accepted: most portrayals of females in video games aren’t great. Either they’re eye candy or they’re to be rescued or they’re merely the love interest or all of the above. Great strides have been made in the past few years. Even Lara Croft can be considered a real character again.

But it looks like most critics of video games forget the many male characters who are just as poor a representation of males as their female counterparts. Apparently these are just “male fantasies” though. So it’s cool for me to play as a muscled, attractive, smart, funny, and all-around superhuman male character because it’s meant to empower me, but a female gamer playing as a female version of what I just described feels oppressed.

I don’t even want to get into the whole politics of this, except to say I disagree. It could be just as damaging to certain individuals. Playing as that sort of male character doesn’t bother me, however. Why?

I know it’s not real. It’s less real than a movie character. It’s nothing but pixels or polygons on my screen. At least a movie character is usually played by a person who had to become that character. Now a real person on screen could be damaging. I realize that. But a video game character? It’s a creation of artists and engineers. It isn’t meant to reflect reality in any way. If you let that bother you, I think you need to sit down and think about things for a while.

It’s a virtual character in a virtual world created by people who simply don’t have a great grasp on what makes a believable character, male or female.

They’re having fun. Or they’re laughing at how little they care about gender representation in their games.

Yes, there are issues. Yes, progress is being made and there’s room for much more progress. But there’s no need to get that frustrated about it. The last thing people should be caring about when they play a video game is what their character looks like or who their character has a crush on. The main concern is whether or not the game itself is enjoyable. Two-dimensional stereotypes can certainly contribute to one’s enjoyment of a game, but it shouldn’t be the one thing to base an opinion on.

I’m not going to play a game like Dead or Alive Xtreme Beach Volleyball simply because there are girls in bikinis in it. If I really liked volleyball games and found the other games lacking, maybe I’d give it a try. But I don’t. And I certainly don’t play or buy games because there’s a hot female character not wearing much. And if you buy your video games based on that, you’ve got issues. Straight-up, no apologies. You’re messed.

Just like if a women or gay man were to buy a video game because there’s a male character in tight clothing that shows off his perfect abs and pecs. Seriously? That’s why you’re buying that video game? But that game has terrible gameplay. 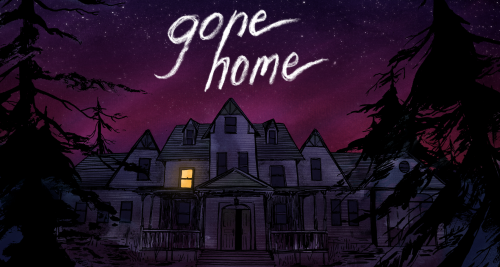 You know it’s indie when the title is all lowercase. So artistic and new!

Look at the above image. Surely you’ve heard of all the praise  gone home is getting for being so amazing. Haven’t seen anything? Read the countless reviews online. You’ll notice something interesting. Every review goes to great lengths to talk about the game’s atmosphere, its voice acting, or its storytelling methods. That’s all fine and dandy, as they’re important pieces to a game.

But they never talk about gameplay. They say you “play” as a female character who arrives home to find her family gone, and you as the “player” must explore the house and read notes and listen to audio logs or narration. But there’s no actual gameplay. You can walk and pick up objects. That’s it. It’s a two-hour “experience,” and that’s as generous as I can get.

It also costs $20. That’s more than a movie for something that barely lasts as long as your average blockbuster.

While many of these glowing reviews for a $20 two-hour-long experience can be attributed to the “but this game is actually art!” argument that’s floating around these days, I think it also has a lot to do with the fact you’re playing as a female. Not just any female, but one whose sister is revealed to be gay.

There’s nothing wrong with that. I welcome new experiences like this. I’ve been a soldier, a Jedi, an Italian plumber, a pilot, and much more in games. I’ve yet to play a female who discovers for the first time her sister loves another woman. That’s not what bothers me. What bothers me is this is clearly the reason the game is getting insane review scores.

I’d wager all my pocket change (joke’s on you, I don’t have any) that if this game featured a straight white male as its lead and the plot revolving around a gay sibling was dropped, it would not get nearly the same amount of praise it’s getting now. It’s new. It’s progressive. But it’s not a game. It’s a bargain bin experience that anybody could make. I’ve seen games that tell their story in a similar way but they manage to cram in actual gameplay as well. There’s nothing special about this. As I said earlier, it’s pure agenda-pushing to appeal to a demographic that is still a minority.

Their arguments are, for the most part, fairly sound. Female characters still suck. They’re damsels, sex objects, or just plain useless in most games. But the sense of entitlement that comes with these demands is absolutely unnecessary. They’re games. They still haven’t linked real world violence to games, so why would someone think a sexy female game character is actually that damaging to women? Celebrities are worse, so let’s focus on that.

This has been the main point of topic about video games for far too long now. Let’s talk about fun again.

I’m well aware I sound increasingly bitter as this article draws closer to its end. I suppose I am a bit bitter. We’re putting too much focus on the wrong topics. We’re less worried about stale gameplay and more worried about representation in games. We now believe polygonal creations are more damaging than TV and movie characters or celebrities. Real world people seem to have less an effect on people than video game characters, if current discussion is anything to go by.

I want games to be about games. Leave the social justice out of them please.

What do you guys think? I really want some good discussion to come out of this. You know how I feel, now I want to know how you feel. Do you agree? Do you think I’m crazy? Did I step over some lines and say things I really shouldn’t have? Comment away. I really want to get some good talks going here.